Is there anyone who hasn’t heard about Justin Bieber yet? Whether you love him or despise him, there’s no denying that what he does to his hair instantly becomes international news.

From his original bowl cut to his recent manly crop, take a look at Justin Bieber’s hair journey through the years and you might find something you want to try out!

Justin Bieber’s big debut was 2009 Kids Choice Awards. It was then the Biebermania began and with it the adoption of Biebes’ hairstyle by thousands of young, and not so young, men in the world. The doctors would argue that the vision-obstructing bangs could lead to lazy eye and that the constant swing of the shoulder to put the hair in place can be a cause of poor posture, but no one cared about that when they could look like Bieber!

Later that year Biebs introduced a bit more ordered shag, sometimes referred to as Beatle-esque and always in perfect shape. Not matter how many crazy dance moves he made on stage his hair perfectly and effortlessly tidy. No easy fit to recreate for all those guys whose girlfriends would swoon for Biebs.

It was roughly at the end of 2009 and beginning of 2010 when we saw him donning various head wear – hats, bandannas,caps. You name it, he wore it!

In early 2011 Justin took a step towards more a grown-up image by getting rid of his trademark shag and replacing it with a hair cut that would show off his maturing face. He claimed that he literally dreamed out the new look, but there was a mix response from the fans. No everyone liked it when he shortened his hair and flipped it up, and his new look cost him thousands of fans who unfollowed him on Twitter.

At the end of 2011 we could see Bieber experimenting even more. First he turned more retro, choosing 60’s inspired frosted tips and style in his faux hawk style. Then, for the American Music Awards he slicked back his hair for this ultimate retro style, complete with the vintage style sut and a bow tie. 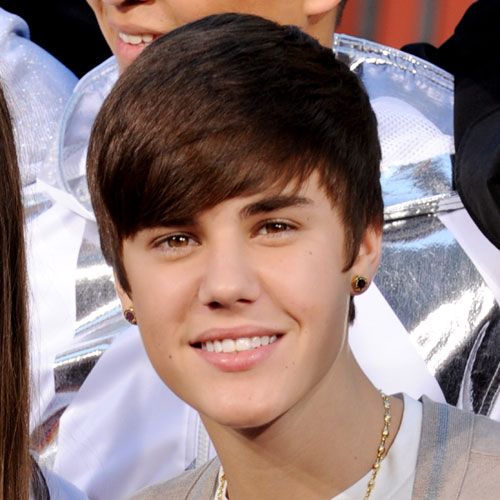 And that only seems to sharpen his appetite for change because in early 2012 Bieber took another huge step in changing his image by darkening his golden locks. Did his girlfriend, Selena Gomez, who was also experimenting with her tresses at the time, inspired him? Maybe you can look for ideas from your girlfriend?

At the beginning of 2012 Bieber still kept to his new colour but was going back and forth to his old hairstyle. Recently at The Teen Choice Awards 2012, we could see him with a faux hawk and his hair flipped up again. How will this influence his fan base? What other hair experiments can we expect from Bieber this year? Only time will tell, but for now, let yourself be inspired by the selection of Biebs styles!